This past Saturday I attended a wonderful cocktail party to celebrate the upcoming nuptials of a couple who will do the actual deed in Singapore on December 21, 2012.  Celebrations by our family for decades, certainly since the 50’s (my memory span) have centered on the the joys of marriage and self congratulatory acclaim on the longevity of said unions – for those able to claim the longevity thing that is.

Now this party was the howdeedoo of welcoming a couple into that hallowed state of union since none of us present could get to Singapore itself, and since we were unable to attend, the host and hostess decided to do a solemn ceremony honoring the young couple.  The performance of said ceremony was a surprise not only for the couple but all the attendees.

Singapore Slings, the signature libation of the evening, complete with other drinks of choice got the party started.  Hors d’oeuvres of every imaginable delicious sort were provided through out the evening and of course the cake – can’t possibly party without cake.

The poor couple must have been asked at least twenty times what a traditional Singapore wedding entailed and finally resorted to saying they would keep us informed each step of the way as it involves a number of ceremonies.  Also in attendance was my world traveling nephew who had spent most of that last two years traveling Africa with his wife who traveled to 347 cities in 30 countries on their own personal mission for Wisdom Exchange TV and here for their Ignite Excellence site.  More on that another post!

Anyway back to the solemn ceremony.  Well it wasn’t too solemn as all mock weddings should shun solemnity.  The bride to be was whisked upstairs to be dressed in style and the groom was given a bow tie and chains for his ankles. (I just need a moment here as Johnny Cash sings…I got stripes around my shoulder I got chains around my feet)…..ahh that’s better. 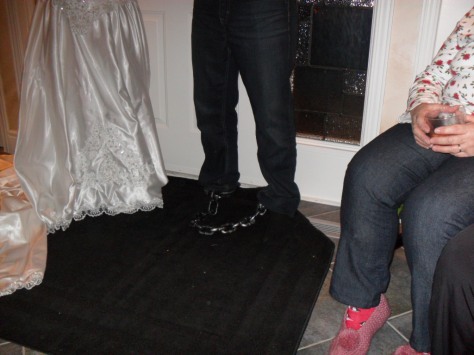 My  brother dressed all preacher like sporting a carnivore bbq apron, knitted hat and other accoutrements not at all related to marital bestowment read from a book on golf as lessons for marriage.  (He himself being wed for more that 45 years can be considered an expert.)

Aside from side splitting raucous laughter and mighty cheers this event took me back half a century when mock weddings were played out at regular times on Stahl Avenue.

During the second World War my grandparents bought one of those big two story homes with large front, back and upper deck porches.  It was the central meeting point at least each Friday when all the aunts, uncles, cousins and other ne’er do wells congregated for an evening of merriment.  It was the place we each took new dates to meet all and it was the centre for mock weddings.  It became customary that my parents and uncles and aunts had to celebrate the 15th wedding anniversary and the 25th in style.

This meant using curtains, lamp shades, quilts and anything else at hand to dress the bride and groom.  My uncle Dick usually was the minister and my grandfather hauled out his shotgun to oversee events and make sure the groom did not make a run for it.  My more talented cousins danced, sang or played the violin and guitar.

As children watching adults convulsing in laughter and delighting in the jokes we all grew up with what some might consider a rather warped sense of humour.

Saturday past was not special just because of the events, the celebrations, but because for a short time during the ceremony and the cutting of the cake I thought I caught from the corner of my eye other generations long gone now swirling around the room and laughing and cheering.  For just one moment they were all with us.