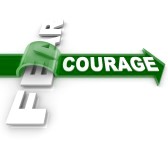 Some of you have noticed my sporadic attendance in posting these last few months, and I thank you for your encouraging words.  I have been occupied by an annoyance of sorts: no not defending the universe from hoards of bad guys, not working out twenty-five hours a day to qualify for the London 2012 Olympics, and certainly not sitting in my vault at Gringots counting my wizard gold.

I have been facing an impenetrable wall called The Fear of Excellence and trying to figure out a way over, under or through.

When I first started posting on WordPress.com I had no idea what I was doing and frankly the first couple of months were nothing.  Aimless actually.  Then in February 2011 I started getting comments.   Well first it was ‘comment’ and that came from Tricia at the domestic fringe on February 25, 2011.  Then Joss popped in, then Pat Cegan and then Colleen.  That original group is still with me along with a few others.  That’s when I started writing to an audience.  So for the rest of 2011 I started posting whatever popped into my cranium.  I cheered on my blogging friends who achieved the sacred Freshly Pressed status and began to toy with the idea that I too might make The List.  Then the persistent thought became rather annoying and I decided not to focus on it at all.

The IT happened.  The Wall.  The Wall of Excellence.  Well I was thrilled!  I spent days reading every post, my heart pounding with excellence as I viewed HER body of work.

First emotion – Joy – – Inspiration, excitement.
Second emotion – Laughter –Yes!  That is the standard I seek!
Third emotion – thread of caution  – um….maybe
Fourth emotion – Fear – I can’t do that! (this one lasted quite a long time)

Convinced I wanted to raise the bar, but gripped by The Fear of Failure or The Fear of Success I stopped regular posts. And even worse I stopped working on my novel, ‘Propagation’.

Have you ever lost your footing? Your grip? Your mind? Due to fear?

That Fear, that Excellence has a name and it is Cecilia at thekitchensgarden.

After wrestling with the demons of the dark side I finally found inspiration again.  I discovered I wasn’t afraid of Celi or her talent.  I was afraid of myself but succeeded in calmly thinking things out.  Now it might seem that calmly thinking took but a few minutes but it took ages.  Simply ages.

Finally going full circle I decided I could raise the bar by working at getting better.
First I needed a theme and to find it started a series of FITFS – following in the footsteps – writing about bloggers I admire and discovering what makes them successful.
Second for the ‘Oh The Plots We Weave’ series I looked at news stories and considered the possibilities for fiction.
Third I discovered a desire to do a ‘This Writer Series’ for all other subject matter.

Next I needed to commit to a schedule.  Three Themes – Three days.  It will look something like this:

With a number of changes, challenges and events I have not been able to think about Propagation for months.  Characters and story lines sit patiently waiting to be given a voice.  Now that I am doing all this bar raising I have a sense of purpose and direction.

So what bars are you raising?

*I know this is Tuesday not Wednesday but ‘This Writer” just could not wait one more day.  When a plan comes together, one simply must act.

The Big Garden Blog
Every Page is Page One

It's In The Tale

We are all stories in the end

Helping you to find the gold nuggets amidst the dirt, sand and pebbles of life!