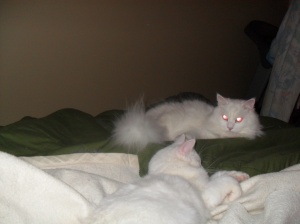 I have spoken of these beasties before.  Jack is King with a capital K.  He can be a bit nasty taking a swipe at your ankles as you walk by him.  He likes to assert his power..his territory.  Then we have dear Jewels who is your typical subserviant please just stay out of my way kind of girl.  She lets Jack reign and I say ‘lets’ because I do believe if this dear lady ever decided to stake territory no one else would reign.

Jack needs to reign.  It is important to his ego.  He even bullies Bree who is away this week with the family at the cottage.  Now as you know we have Gus who is pretty new to it all.  So far Jack seems to be happy to just watch over the newcomer kitten although he is not above giving the kid a swat when needed.

Now Jack does not like me very much and for the life of me I don’t know why.  If I am in the kitchen he stretches out across the floor letting me know I am in his territory.  And he was forever taking swats at me; walking down the stairs, down the hall..well you get the idea.

Now this week, with his whole adoring family gone it is just me, Jewels, and the new kid Gus.  The family have been gone almost a week and tonight is the first time Jack decided to spend anytime major time with me.

Gus and Jack routinely wrestle around, most often in play but J always asserts his power when he becomes bored with the new kids antics and that pretty much ends the game of the moment.

Except tonight.  I am not sure if Jack sort of figures I am the new sheriff in town permanently but he decided to spread his territory.  Except Gus, the kid, has been used to sleeping on my bed at least for part of the night.

So first Gus makes himself at home beside me on the bed.  The evening is wearing on and before you know it, who makes an entrance but Jack.  He stands on the floor for a bit watching me and the kid, settling down for a bit of a read before slumbers.  Then he jumps up on the bed, my bed you understand, and sits at the foot watching us.

I’m figuring it could be very nice to tell the family, when they return that Jack and I are A1 buds.  That we slept together in perfect harmony.  Then all of a sudden there is one swift motion and a whole bunch of white fur and a bit of growling ensue.  Right beside me! 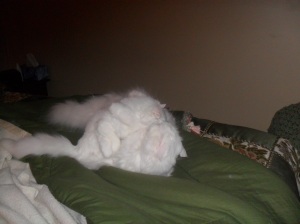 Believe it or not there really are two whites there.  Not sure what to do I remain very very very still.  Suddenly Jack jumps back and leaping from the bed leaves the room.  Gus, the new kitten in town settles and stretches out making it clear where his territory is. I tried taking photos at which point they both left my boudoir.

Guess I won’t be sleeping with Jack after all.  As for Jewels?  Well she could care less.  Her only staked out territory is my desk chair and neither of the other two seem interested.  So it all works out for her.

I have discovered some basic truths in my childcare experience this week:

Just because a child turns three it does not mean he is out of the terrible twos.

Children of seven actually have a social circle independent of Mommies hovering.  They have best friends whom they will prefer over Grandma once they are sure said Grandma will not be lavishing any presents on G2 in their absence.

The key to getting a three year old settled is to drive every ounce of energy out of them in play time preferably outside in fresh air.  Of course the risk to the driverouter is permanent immobility, pain, exhaustion and a serious reconsideration of the whole mixing booze and drugs together argument for sustained relief.  Just a thought.

So yesterday, day three was pretty normal. More parks, lots more walking, tantrum prior to afternoon nap.  G1 spent both days at his best friends so really there was just me, the five month old yellow lab of sonic strength and G2.

The only thing of note from yesterday was that as our little troupe marched along the street..or staggered depending on the antics of the Gdog, is that someone in misstep passed gas.  Now G1 says, “Who farted?” I can see him processing some vital facts here.  He knows he did not do it and although the dog is famous for it, he’s pretty sure Gdog did not do it.  To help him with the struggle of his thoughts I thought I would fess up.  He seriously considers this for a few seconds and I swear I could hear the wheels grinding.   Finally the power of GRANNY comes forth.  It would be impossible for Granny to do this.  In a soft voice he says, “No I’m pretty sure it was the dog.”

By last night I was worn and while happy, exhaustion had me feeling lower than a snake’s belly on a hot rock.  A happy tiredness and really I am sure I no longer have pain.  I am convinced this is a true sense of well being – I just didn’t recognize it.  I think my body had developed some kind amnesia about well being but I think this is it.

Today I was ready to put what I knew into action.  The troupe walked G1 to his best friends house and I in all my wiliness headed straight for the park.  This child is going to get so much exercise, so much fresh air he will be begging to take a nap. So I pushed swings, chased him up and down the play structures.  Even walking him home It crossed my mind that Gdog was behaving pretty good.

Once we get home to the yard I could see a spot of energy left so pulled out all the cars and scooters out of the storage shed and I pushed him and chased him til his giggles started to peter out.

The plan is working,  Now I just have to deftly get lunch into him and wheedle him into his bed.  Wow it worked ..just a few extra cuddles. and he looked ready to sleep.  For a moment he started to move like he was going to sit up until I convinced him he was a puppy.  So he assumed the puppy position and was gone. Yeah!

Settling on the sofa I thought I might see what is on day time TV.  But I could not find the remote.  After a ridiculous amount of time searching and turning lazy boys on their sides, scouring floors and toy boxes I gave up and embraced the silence.  The hum of pain..I mean well being through my entire body convinced me that a nap might be in order.  However that wasn’t going to happen.  An hour after the appointed time I remembered I had not fed Gdog.  Hauling myself off the sofa I completed that task. Convinced a nap was really now in order I stretched out for some R&R.

Within minutes of ingesting his gourmet dog food the pup started whining.  So once again I rise.  Hmmmm she seemed to have some difficulty going so when I stomp across the muddy yard to check on -the results – I see a watery product rather than the scoopable kind.
I make mental note to let my DIL know.

Then two hours later a whole bunch of things happen at the same time.  G2 wakes, my DIL is there and the sonic dog has to go out.  This time there are spots across the concrete patio of Gdogs ailment. The well rested G2 is tearing around through mud and other things in full energy mode.  I try washing away the ailment evidence with a bucket with no luck.  DIL tries to get the hose working and gets some detergent and a brush for scrubbing. She is lathering soap in the appropriate spots and scrubbing with a brush.  I have the hose which is leaking everywhere except the spout and two critters who are trying to catch the water.  Gdog in her excitement has jumped upon the child and me and pretty soon all three of us are soaked and covered in mud.  DIL grabs the dog, I grab the child and whip him inside into a running tub of water.  I change into clean clothes..which are my pajamas.  Don’t ask.  I dress the child in his pajamas.

Not bad work for four in the afternoon!