It’s getting to be that time of year.  Warm days tinged with just a hint of approaching Autumn though no trees of colour noted yet.  After all it is early September here in Southwestern Ontario. 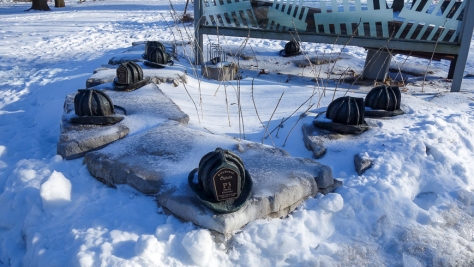 But September is also a time of remembering.  In a world filled with tragedy on a daily basis 9/11 remains the one that struck so many of us, American and non-American.  It was a wake up call of sorts I guess, alerting us to Horror and Hope.

The other day I took a walk, as I do, aiming for that 10,000 step threshold to health.  I was  going to Central Library, strolling down a street with old trees and old very large houses when I came to the corner of Margaret and Queen and noticed a small park sort of nestled in the area of Centre in the Square, of The Art Gallery, apartment buildings, and beside the library.

Having nothing to do I decided to stroll through this pocket sized park that sported a sculpture in the middle.  Unsure exactly what it was, (we have some truly baffling sculptures here and there in the city) I approached cautiously.

My jaw dropped as I did a 360.  I had no idea how long it had been there at that point but knew I had to find out. 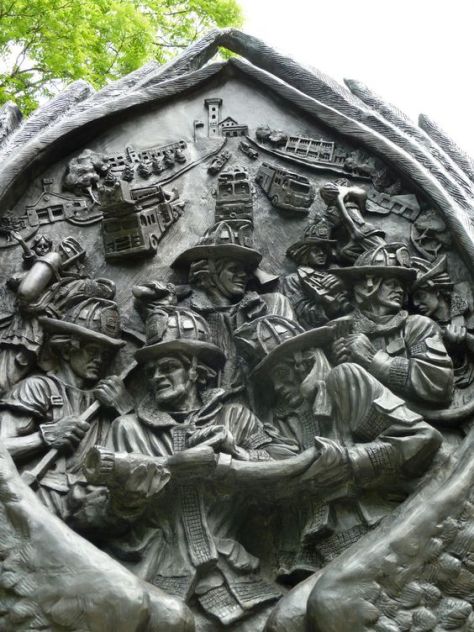 The sculpture was done by Timothy P. Schmaltz, a Canadian sculptor in 2008 to honour those killed in the line of duty.

As I followed the pathway I came across a rusted bit of iron and at first I grimaced.  Who would place this here amongst this beauty.  Then I read the plaque.

The rusted metal beam is from New York City’s fallen World Trade Center and is 3.43 metres long.  The length is purposeful since 343 firefighters were killed that day.

Steel from the World Trade Center has been sent world wide, even as far as China for Memorials.  It certainly has a fitting home in our Memorial Park.

The photos here are from winter (obviously) and of course my stroll was in the heat of a 28C day.  The photos are from the publication Under The Sun and the park, if you are in the area is at 101 Queen St. N. Kitchener, Ontario, N2H 6P1, Canada.

thekitchensgarden
How To Ebook

Tips and exercises to improve your Emotional Intelligence.

Intrepid Optimist is the place where I can share my stories; fact, fiction and thoughts from the past and present. It’s Written by myself for people who believe adventure knows no age

Waking up on the Wrong Side of 50

Navigating the second half of my life

Hey from Japan- or wherever the moving van arrives- Emily Cannell