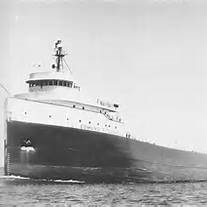 November 10, 1975 the SS Edmund Fitzgerald, a thirteen thousand ton Great Lakes Carrier sank in Lake Superior due to a Texas Low.  The Edmund Fitzgerald – the same ship made famous by Gordon Lightfoot in song.  Launched in 1958 she was the largest carrier on The Great Lakes until 1971 and was labeled “The Pride of the American Flag.”

The Great Lakes have a long history of laying claim to those who choose to sail her mighty waters – but  that is a different story.

Southern Ontario, not to mention many other parts of the country and province have weathered our share of storms this year.  Last year it seemed we heard a lot about Alberta Clippers clipping in with a goodly dose of snow and storms.

This year it is all about, yes the Alberta Clipper, but also THE POLAR VORTEX which has given us a new appreciation of old man winter who decided to take his polar weather south as though he was a Snowbird, and his presence has been felt as far the deep southern states.

Now our American friends simply cannot be left out of the party so sweeping up from the Texas Panhandle and the Gulf of Mexico comes a Low weather front that will hit us tonight – The Texas Low.

As many of you know I lived in Texas for a couple of years where much of my heart continues to reside.  So all I can say is, welcome Texas Low.  Please come in and enjoy the party.  Only the very best are allowed here and the guest list is limited to the Alberta Clipper, Polar Vortex, and of course Texas Low.

Let’s mix it all up; twirl, dance, swirl, blow, gust away.  This is winter and you have just a month to let loose and party hearty because after all this comes spring, and like a child who has exhausted all their energy romping about a little out of control, I expect you to depart with Grace and Style when the time comes.